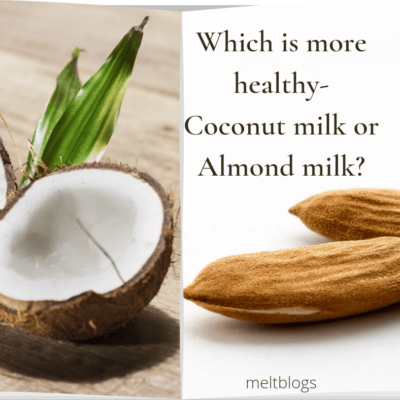 Which is more healthy coconut milk or almond milk?

Which is more healthy coconut milk or almond milk? If you want to know the difference between coconut milk and almond milk, then read this article once. Milk should be a part of everyone’s diet. Calcium-rich milk is helpful in bone strength and physical development. Whether it is a child or an elder, everyone must consume milk. However, not everyone can consume milk even if they want to. Some people are lactose intolerant, due to which if they consume milk, then it increases their chances of developing many health problems including allergies.

Table of Contents hide
1 Which is more healthy coconut milk or almond milk?
1.1 Coconut milk contains more calories
1.2 Potassium and calcium content
1.3 Sodium and milk
1.4 Other advantages of both milk

In such a situation, it is advisable to look for some healthier alternatives to milk and the idea of ​​consuming coconut milk or almond milk crosses the mind. However, if you want to make either of these a part of your diet, then you should also be aware of the difference between them. So today in this article, we will tell you the difference between coconut milk and almond milk.

Also Read: Signs of increasing bad cholesterol in the body.

Which is more healthy coconut milk or almond milk?

Although almond milk contains a sufficient amount of potassium and calcium, sodium is also found in it. However, excessive sodium intake can be harmful to the body. Excess sodium can increase the problem of heart BP, and body water retention. If seen from this point of view, then consuming coconut milk can prove to be a better option.

Other advantages of both milk

Almond milk is cholesterol free and the fat present in it makes the heart healthy. In addition, almond milk is high in vitamin E, which is an antioxidant that fights damage caused by free radicals. It is also considered good for weight loss. At the same time, coconut milk helps nourish the digestive system, helping to improve gut health. It also contains acids that are good for energy and electrolytes that help re-energize your body.

In this way, it can be said that both almond milk and coconut milk have their benefits and which milk you should consume mainly depends on your health condition.

Which is more healthy coconut milk or almond milk