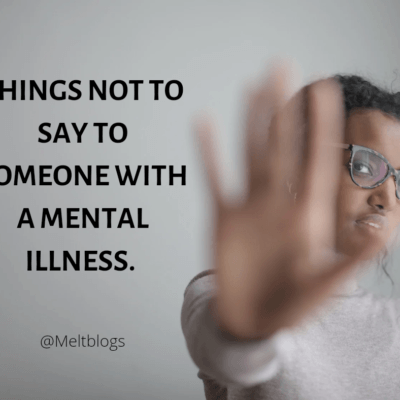 Things not to say to someone with a mental illness: When we are talking to a person suffering from any mental problem, then during that time we should speak thoughtfully. There are some words and things that act as triggers for people suffering from mental disorders. Speaking these words or things can hurt them. Due to this, the health of such persons may worsen. Therefore, care should be taken while talking to patients about all serious mental problems like depression, and stress.

Table of Contents hide
1 Things not to say to someone with a mental illness:
2 Don’t call them crazy or stupid
3 Do not avoid their problem
4 Do not use words like suicide
5 Avoid saying things like getting out of these things
6 Avoid asking them to stay positive

Things not to say to someone with a mental illness:

Due to work pressure, poor lifestyle, financial insecurity, and some incidents in life, the number of people suffering from mental problems is increasing in today’s time. Patients with all mental problems like depression, anxiety, bipolar disorder, and borderline personality disorder may also be around you. While talking to such people, it must be kept in mind that they are not mentally healthy. Some words or things should be avoided while talking to such people. You may be unknowingly saying something to a person suffering from a mental problem, but it may be that due to this, he may have more problems. Some words and things can trigger the problem of patients, let us know about them.

Don’t call them crazy or stupid

Don’t call a person with mental illness crazy or stupid Many times. It happens that we unknowingly use these words while talking about a person suffering from a mental illness. If you use these words in front of patients, then it directly affects them. In some cases, these words can even trigger patients. In our society people look at a person suffering from a mental problem differently. Sometimes they are even teased with such words, which should not be done at all. The use of such words in front of them can cause a lot of problems for them.

Do not avoid their problem

Avoid saying things like getting out of these things

One should avoid saying ‘get out of these things to a person suffering from any mental problem. By saying this, the person in front will feel that he has intentionally got into that situation. It is not easy for a person suffering from a mental problem to be normal on his own. It requires all kinds of therapy and treatment. Therefore, such things should never be said to such persons.

Avoid asking them to stay positive

Forcefully asking a person with mental illness to stay positive is wrong. It is not so easy for a person suffering from a mental problem. Therefore, it should always be taken care of that you avoid asking them to stay positive.

If symptoms of any kind of mental problem are seen, the advice of a doctor or expert psychologist must be taken immediately. There are a variety of medical options available for mental illnesses today. Recognizing the symptoms and getting treatment in time can improve the condition of the patient.