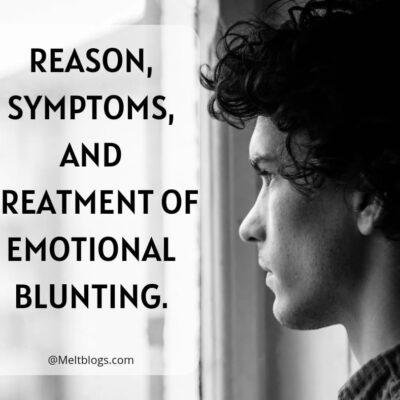 Reason, symptoms, and treatment of emotional blunting: Emotional ups and downs in a person’s life are considered normal. Everyone’s way of expressing their feelings may be different because everyone has different types of emotions. Some people may have difficulty expressing these feelings, while some people can easily express their feelings in front of others. People who have trouble expressing or sharing feelings with others may have a mental health problem called emotional blunting.

What is emotional blunting?

Emotional blunting is such a mental problem that makes any person emotionally blunt. A person who goes through all kinds of emotions but is unable to express that feeling or does not understand how to express his feelings in that situation. This problem can last from a day or two to several months. A person who goes through this condition repeatedly may have to face serious mental conditions like depression later. Feeling hesitant to share one’s feelings with others or being unable to express feelings increases a person’s risk of serious mental conditions such as post-traumatic stress disorder (PTSD). Some people suffering from the problem of emotional blunting also have trouble recognizing their emotions, they do not know what feeling or emotion they are going through. A kind of confused expression is also seen on the face of the person suffering from this problem in every situation.

There is no exact cause for the problem of emotional blunting. This problem occurs in people due to a variety of mental conditions and lifestyles. When a person does not recognize the feelings going on within himself and has to experience difficulty in expressing those feelings to others, then he is said to be a victim of emotional blunting. These could be the main reasons for this situation.

In some people, the problem of emotional blunting can be due to the antidepressant drugs used in stress and depression. Many researchers have also confirmed that people who take antidepressants such as serotonin reuptake inhibitors (SSRIs) have a reduced ability to experience emotions.

People who consume excessive alcohol can also have the problem of emotional blunting. Consumption of alcohol damages our central nervous system, due to which alcohol use disorder develops. Such people lose the ability to feel and express their feelings.

People who use drugs also have the problem of emotional blunting. Consumption of drugs like cannabis or heroin damages the nervous system of a person due to which the person becomes emotionally blunt.

Alexithymia is a type of mental disorder due in which the ability of people to recognize or feel emotions decreases.

A person suffering from this problem also has to face situations like flashback trauma, due to which the emotional capacity of the person gets weakened.

The problem of migraine can also make a person emotionally blunt or inactive. Symptoms of emotional blunting can be seen in people suffering from severe migraine problems.

The common symptoms seen in this problem are as follows.

Failure to be happy or unhappy

If the problem of emotional blunting is in any person for a long time or if the person is showing severe symptoms, then he should seek the advice of an expert and licensed psychotherapist.