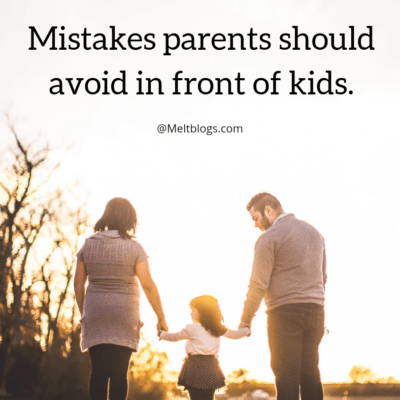 Mistakes parents should avoid making in front of kids.

Mistakes parents should avoid making in front of kids: Many times parents unknowingly make such mistakes in front of their children, which have an impact on the child’s life of all ages. Today we will talk about these mistakes which parents are supposed to avoid as they have a bad effect on children.

Table of Contents hide
1 Mistakes parents should avoid making in front of kids:
1.1 Always fighting at home
1.2 Raising hands
1.3 Not associating with anyone
1.4 Strict discipline

Babies begin to understand the home environment right from childhood. By the age of 4-5 years, children are completely adapted to the home environment. They start recognizing the nature of every member of the house. Many times children become mentally disturbed gradually, which can also be seen well in their nature. Due to such an environment, the mental health of the children becomes affected and they stay irritable constantly.
In such a situation, as a parent, you should make sure that you are giving a safe environment to the child, which does not affect the child.

Mistakes parents should avoid making in front of kids:

Raising hands in front of children can remain in their bitter memory for all his life. It may also happen that seeing the constant violence in the house, the child starts getting stressed. The things that get printed on the heart of the child in childhood, their effect remains on their life for a long time. Therefore, avoid abusing or beating in front of the child. It can have long-lasting negative effects on both the physical and mental health of the child.

Not associating with anyone

Nowadays most people live in a nuclear family. In such a situation, if you do not socialize with anyone around your family, then this is also not a good thing for the overall development of the child. For the development of social skills in children, they must mix and talk with other people. The child learns a lot from all this. This will make the child more confident. At the same time, he will understand how he should behave in front of someone. All these things will be very useful in his life. Fix one day in a month that you invite someone to your house or you go to someone’s house.

Learn to keep stress free environment at home. By adopting these things, you can develop the child in a good way.

Mistakes parents should avoid making in front of kids