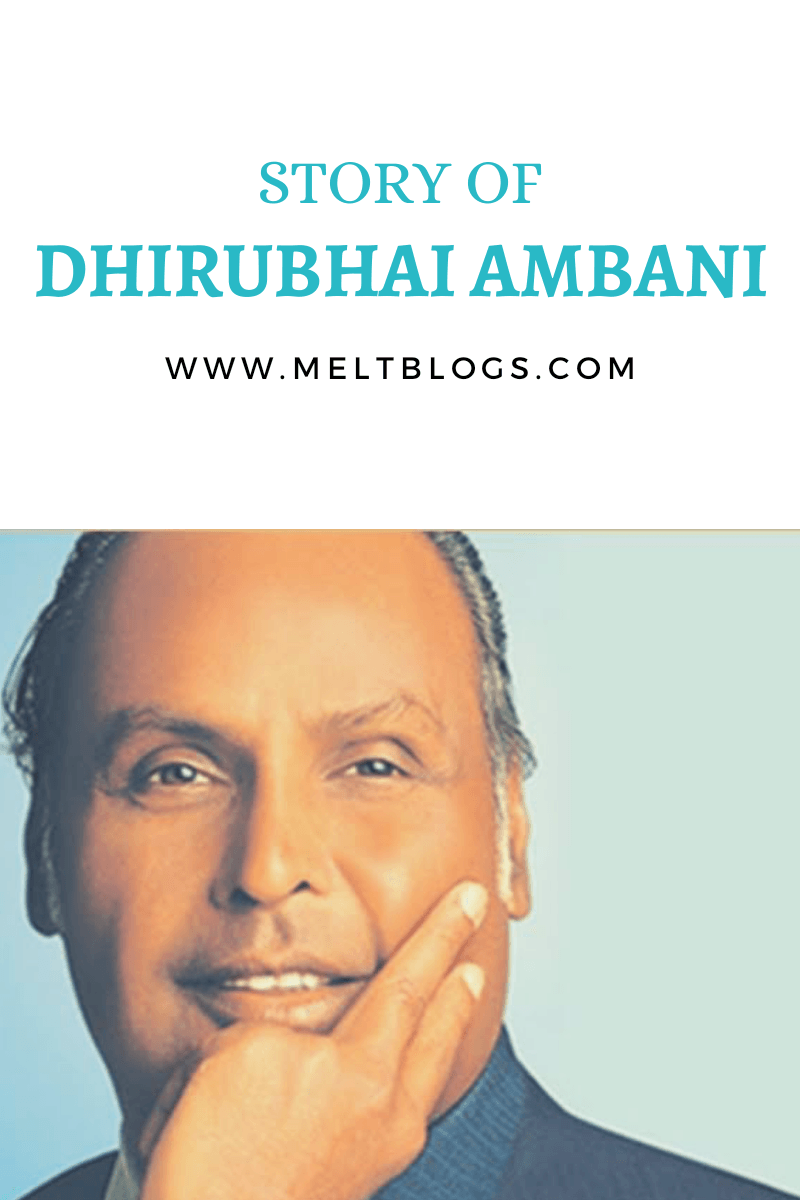 Dheeraj Lal Hiralal Ambani, who is known as Dhirubhai Ambani. His fame is spread not only in India but also in the whole world. Dhirubhai Ambani’s name was on the list of successful businessmen who dared to dream and turned them into reality. And proved to the whole world that if you believe in something you get it.

Dhirubhai Ambani was such a personality of India, who not only earned a prominent reputation in the business world but also gave India a new identity in the field of industry.

Born into a poor family, Dhirubhai dreamed of becoming a big businessman. And with his determination and hard work transformed his dream into reality.

Dhirubhai Ambani was born on December 28, 1932, in the home of a Teacher from Chorwad, a small village near Junagadh, Gujarat.

His mother Jamnaben was a domestic woman and his father Gordhanbhai Ambani was a simple teacher. For whom it was quite challenging to raise such a big family. At the same time, their jobs did not pay enough for the house expenses. In such a situation, it was difficult to get Dhirubhai’s education among four more siblings.

Dhirubhai Ambani had to leave his high school studies in the middle due to the economic situation in his house. And he had to do small jobs with his father to support the family.

Joining Job After A Business Failure

Dhirubhai Ambani first started selling fruits and snacks given the economic condition of his house, but there was no profit.

After this, he started selling pakoras in religious and tourist places near the village. This work was completely dependent on the tourists who used to visit the place, which was only for some period.

Dhirubhai had to stop his business and after not being successful in any work, he joined the job again on the advice of his father.

Despite Doing A Job, He Also Did Business.

After all the failures, Dhirubhai Ambani decided to work in Yemen with the help of his elder brother Romanik.

He did his first job at a petrol pump of a shell company. After working for about 2 years, he rose to the position of manager because of his efficiency and ability.

However, even when working, he always looked for opportunities to do business. From the beginning, he did not want to let go of any opportunity of doing business.

During that time, the employees working there used to get tea for only 25 paise, but Dhirubhai did not buy tea for 25 paise and used to go to drink tea for ​​1 rupee in a big restaurant.

He used to do this so that he could listen to the big businessmen visiting a restaurant, and understand the fineness of the business.

In this way, Dhirubhai studied business management to fulfill his big dream of being a big businessman.

Till the time the Yemeni government came to know about this, Dhirubhai Ambai had earned a lot of profit.

How To Make Your Dreams Come True?

The movement for independence of Yemen started, and the situation became so bad that Indians living in Yemen had to leave their jobs.

In such a situation, Dhirubhai Ambani also left his job and returned to India. Then Dhirubhai, who was dreaming of becoming a businessman, decided to do business. However, to start any business, investment was needed and Dhirubhai did not have the money to start a business.

After which he started the import-export trade of polyester yarn and spices with his cousin Trimbakalal Damani.

Then, he started Reliance Commercial Corporation with a small office at Masjid Bunder’s Narasimha Street Which was just a room of 350 square feet with only one telephone, one table, and 3 chairs with an amount of just Rs 15,000.

Initially, he had only two co-workers who used to help him in his work and this is where the Reliance Company emerged. At the same time, Dhirubhai Ambani and his family lived in a small apartment in Jai Hind Estate in Bhuleswar.

After this Dhirubhai Ambani tried his luck in the cotton business and started this business with positive thinking.

Dhirubhai Ambani gradually got a good understanding of the cloth business. Due to good opportunities in this business, he established a textile mill in Nairo, Ahmedabad in the year 1966 where the polyester thread was used to make garments, and then Dhirubhai Ambani named the brand as ‘Vimal’ brand.

The brand was named after Vimal, Dhirubhai Ambani’s elder brother Ramniklal Ambani’s son Vimal Ambani. The brand was widely promoted all over India.

In 1975, the World Bank technician team visited the manufacturing unit of Reliance Textiles and described it as being well above the standards of developed countries.

In the 1980s, Dhirubhai Ambani took a license from the government to manufacture polyester filament yarn. After this Dhirubhai Ambani continued to climb the ladder of success and he never looked back on his career.

The credit for introducing the equity cult in India also goes to Dhirubhai Ambani. Reliance issued an IPO in 1977, and more than 58,000 investors invested in it. He was successful in acquiring villagers of Gujarat and other states that he who would buy his company’s shares would get a lot of profit on his investment.

Reliance Company started with one room, by the year 2012, about 85,000 employees were working, while the central government used to give Reliance 5 percent of the entire tax, and in 2012, according to the wealth of the world’s 500 richest and Reliance was also included in the giant companies.

Apart from this, He has also been included in the list of Asia’s top businessmen.

It was even said that the competitor was defeated by government policies. But Dhirubhai Ambani had no impact on the criticisms and continued to go towards his goal.

Dhirubhai Ambani was admitted to the Branch Candy Hospital in Mumbai on 24 June 2002 due to a heart attack. After this, his health continued to deteriorate and on July 6, 2002, he took his last breath.

After his death, his business was handled very efficiently by his elder son Mukesh Ambani. Today he is included in the list of India’s richest and the world’s most successful businessmen.

Dhirubhai Ambani was given the “Wharton Dean Medal” by the University of Pennsylvania in 1998.

Dhirubhai Ambani was awarded the Business India-Business Man of the Year award in 1999.

In 2000, he was awarded the ‘Man of the Century award by the Chemtech Foundation and Chemical Engineering World for his significant contribution to the development of the chemical industry in India.

He was awarded the Lifetime Achievement Award under the Economic Times Awards for Corporate Excellence in 2000.

In 2011, he was posthumously awarded the ‘ABLF Global Asian Award’ by the Asian Business Leadership Forum Awards.

In 2000, the Federation of Indian Chambers of Commerce and Industry (FICCI) declared it ‘Man of 20tH Century’.

He was honored with the Padma Vibhushan as the second-highest citizen of India in the year 2016 for his significant contribution to business and industry.

Some Quotes By Dhirubhai Ambani

If you don’t build your dreams, someone else will hire you to help them build theirs.

The success of the young entrepreneur will be the key to India’s transformation in the new Millennium.