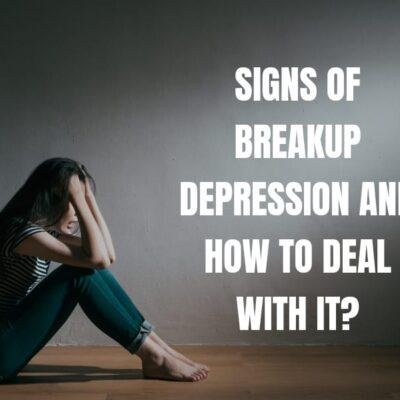 Breakup Depression: Signs and prevention strategies: The end of a connection can cause painful emotions, including breakup depression. It is normal to feel miserable when a relationship ends, especially when the relationship was serious and you were not expecting the breakup.

Sadness after facing such a situation may be mild and perish with time, but in some situations, it can move to clinical depression. In either case, there are different ways how to get over it.

Why are breakups hard?

Breakups are hard because they generate major life changes, such as worsened finances or a renewed living situation. It is also necessary to remember that with a breakup, you are suffering the loss of an important relationship.

Even when there were issues in the relationship, the breakup is still a loss.

Following the loss of a relationship, you may also feel lonesome. Some other reasons why breakups are hard are that you may experience low self-esteem or have a different sense of who you are.

Sometimes a relationship becomes the key part of your identity and losing that can change the way you look at yourself. In some cases, the loss of a relationship can make you feel empty as if you do not know who you are.

In a few cases, a breakup may mean that you have to co-parent children with your former partner. It means giving up time with your children so that your former partner can spend some time alone with them. Eventually, breakups are challenging because they lead to so many transformations all at once.

Can a breakup cause depression?

As previously explained, breakups are difficult. Breakups can thoroughly change your life and make you feel lonely. While sadness after a breakup is normal and will pass with time, breakups can cause depression in some people.

Signs of depression after a breakup

Post-breakup depression can vary from brief periods of sadness to full-blown clinical depression. It is usual to feel emotions like sadness, irritation, and anxiety after a breakup. Still, if these feelings are ongoing and lead to intense sadness, you start showing signs of depression after a breakup.

The emotions after a breakup are identical to symptoms of clinical depression. In some cases, a psychologist may diagnose an adjustment disorder, called situational depression, when someone is suffering from post-relationship depression.

Some signs of this condition are as follows:

To meet the benchmarks for clinical depression, you must have at least five symptoms of depression after a breakup. Symptoms must also appear for at least two weeks.

How to overcome depression after a breakup

Take care of yourself

Caring for yourself with plenty of sleep and proper nutrition can make it more manageable to handle the situation. When you take care of your health, you will feel better, which will eventually lift your mood.

Make a journal of your feelings

Studies show that writing about how you are feeling is a convincing way to deal with situation.

You may feel sad to be productive, but venturing into projects or taking on a new activity can prevent you from living on your emotions after a breakup.

Exercise encourages a good mood just as well as some antidepressant medications, and it can increase your feeling of well-being. Getting up and moving can, therefore, be an ideal coping strategy for recovering from suffering.

In widespread, taking care of your health and finding chances to try new activities and connect with other people are essential ways of how to deal with the mentioned issue.

Spending time with close friends or creating social support networks, such as online help groups, can help you to overpower depression after a breakup.

Establishing strong relationships with friends or with people experiencing similar situations can help you to stay socially committed as you lose a key relationship. This can make it easier to deal with it.

Signs of a good relationship.

How to find inspiration every day?

How to find inspiration every day?

Signs of a good relationship.