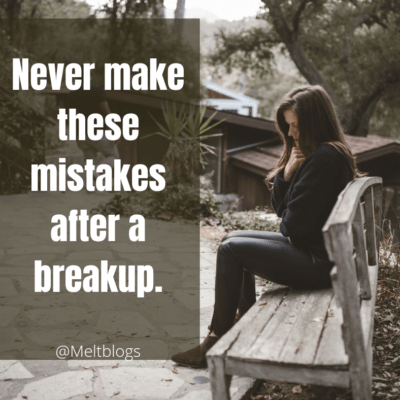 Never make these mistakes after a breakup.

In the meantime, if you make some mistakes, then there are many problems in getting patched back. Many people take many such steps in haste after a breakup, after which the way back to the relationship is closed. Therefore, after a breakup or quarrel, you should take care of some things and avoid making some mistakes, so that if you want are willing to go back to the relationship, you can easily return.

Never make these mistakes after a breakup:

Nowadays sharing relationship status on social media has become a fashion. It is wrong to brag about your relationship as soon as a breakup occurs and it also reduces your chances of patching up again. So avoid doing this. Prefer sharing your feelings with someone. Share the breakup story with your family or special friend.

Many times people start arguing with their partner to save the relationship. This habit can keep you away from improving the relationship, and it can spoil it. In such a situation, give some time to the partner. Let their anger subside. Instead of talking to yourself, try to talk through a common friend. Keep in mind that whenever you talk to your partner, accept them as they are. Don’t try to change them at all. This thing can be bad for the partner.

Also Read: Healthy ways to move on from a relationship.

Don’t date someone right away

Many times people start getting attracted to someone else for emotional support soon after a breakup. In such a situation, if you start dating someone else after the breakup, then this thing can ruin your image in front of your partner. This can also eliminate your scope for patching. Keep in mind that after the breakup, give some time to the relationship. If you are sure to get back into the relationship, talk to your partner directly or through a common friend.

Know the reason for the breakup

Sometimes breakup happens due to some misunderstanding or ego. If a misunderstanding has taken place in the relationship, try to clear it up. If possible, you can also get the partner to talk to a trusted person about this. On the other hand, if the breakup has happened due to your ego, then talk only after calming the ego. We should never give place to the ego in relationships.

If something is bothering you about the relationship, then talk to your partner with a calm mind.

Do not bother to patch up

Many times people start harassing their partner by making phone calls, messaging, or reaching outside the office or college as soon as the breakup occurs. These things can take the partner away from you. All these things can also irritate your partner.

Note, after the breakup, give some time to the partner. Sometimes the lack of each other’s presence can also make you miss the love. Wait for the partner’s anger to reduce without showing haste in the relationship immediately.

Never make these mistakes after a breakup