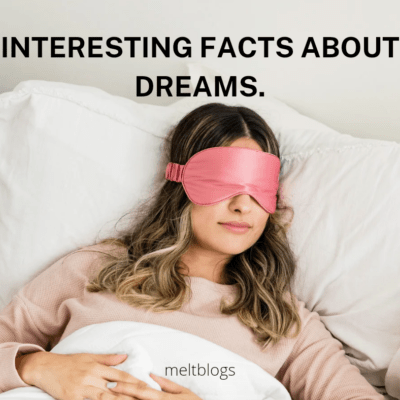 Interesting Facts About Dreams. Friends, dreaming while sleeping is one of the most mysterious and exciting experiences in our life. So if you are curious to know about the psychology of dreams then read our article till the end.

In today’s post, we have brought some interesting facts about dreams, that you might be still unaware. So let’s read about Facts About Dreams.

Table of Contents hide
1 Interesting Facts About Dreams:
1.1 When a person snores while sleeping, then that person is not dreaming.

If you are constantly seeing someone in your dream, then it means that you are missing him a lot.

We forget about half of the dreams seen in the night time within 5 minutes of waking up, and 90% of the dreams we forget within the next ten minutes.

According to a study, a person spends about 6 years of his life only in dreaming.

Every human has about 4 to 6 dreams in a night.

If a person sleeps less, then he has less chance of having dreams.

Most people have such dreams when they wake up, they do not know exactly whether it was a dream or a reality.

When there was no color television, people mostly had black and white dreams.

People with personality disorder do not have dreams.

According to a research, young children of 3 to 4 years do not have dreams.

When a person snores while sleeping, then that person is not dreaming.

If you dream about a person even while awake, it means that you are missing that person.

When you dream, you do not remember where your dream started.

Those who are blind from birth, they also have blind dreams, meaning they do not see any picture, only dreams related to sounds, smells and emotions come.

According to a study, we cannot read or write anything in dreams, even we cannot see the time in the clock.

Most of the dreams that come are because of worrying and stressful, it means more the negative emotions, more the dreams.

According to a survey, dreams seen in the morning come true, but it happens very rarely that they prove to be true.

It is believed that the whole world is a dream and the reality is something else, it is written in our old Vedas.

Not every man sees colorful dreams, that means not everyone’s dreams are colorful.

We see only those faces in dreams, which we already know, because our brain does not make faces on its own.

Do you know that animals also dream while sleeping.

You will be surprised to know that both men and women have different types of dreams.

Do you know that the idea of ​​​​inventing many things came in the dream, such as saving machine, DNA machine etc.

The first book based on dreams was written in the country of Egypt. It was written around 4000 BC.

According to a study, the most common dream people have is that they are cheating on their spouse.