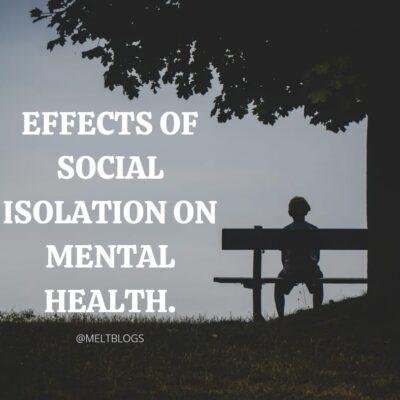 Effects of social isolation on mental health: There are about 9 million people all over the world who are suffering from some kind of mental illness. Loneliness is a big reason behind all these types of mental illnesses. There was a time when living alone was a difficult task for people. Amid a full family, people used to find time to be alone for themselves. Loneliness today is making us sick in the way that our productive capacity is decreasing. At the same time, due to the stress caused by it, serious diseases like high blood pressure, infection, and brain stroke are increasing day by day. Recent research shows how loneliness is slowly eating people like termites. What does the research say? As per the research, it is said that in the past 40 years, the use of the Loneliness Scale has increased.

Table of Contents hide
1 What is loneliness?
2 Effects of social isolation on mental health:
2.1 High blood pressure and heart disease
2.2 Decrease the immunity
2.3 Poor sleep
2.4 Inflammation in the body

Loneliness is defined as an individual discrepancy between social connections and family connections. This means that today’s youth keep avoiding both their family and social life. Some people are socially isolated but do not feel lonely, while some people who are not alone and surrounded by people feel more isolated. According to the researchers, this situation is more frightening because such people find it difficult to understand and gradually they suffer from some serious disease.

Due to loneliness, there is a lot of pressure on people’s hearts and blood circulation. Cardiovascular effects are often attributed to cortisol. Studies of stress hormones and loneliness have shown that people have consistently increased levels of cortisol. Which can contribute to other types of problems. It can cause chronic heart attacks and high blood pressure. The cardiovascular systems of people who live alone are more constricted and pressurized. According to an NIH review of the physical effects of loneliness, persistent feelings of rejection or loneliness in life can lead to death in youth.

It is a very prudent thing that loneliness can also reduce the immunity of your body. In this way, one can be more vulnerable to any disease. A study related to this has found that more lonely people do not produce antibodies properly in their bodies, and they are exposed to the flu or infection very soon. The stress hormone in people’s bodies fails to coordinate with other hormones and the brain.

Lonely people sleep longer than non-lonely people, but they did not see any relief from it. This suggests that sleep deprivation can certainly be a major problem due to loneliness. Due to lack of sleep, the eating habits of such people also get worse, which increases the risk of diabetes tye-2.

Inflammation in the body

Lonely people are especially susceptible to chronic inflammation, which can lead to Alzheimer’s, clogged arteries, and periodontitis. Research suggests that lonely people develop a genetic immunity to the anti-inflammatory properties of cortisol due to increased stress hormones, therefore, increasing the defensive inflammatory response. Meaning that being alone can cause different types of inflammation in your body. Lymph-associated disorders are also found in such people.

How to boost fertility with PCOS?

How to boost fertility with PCOS?