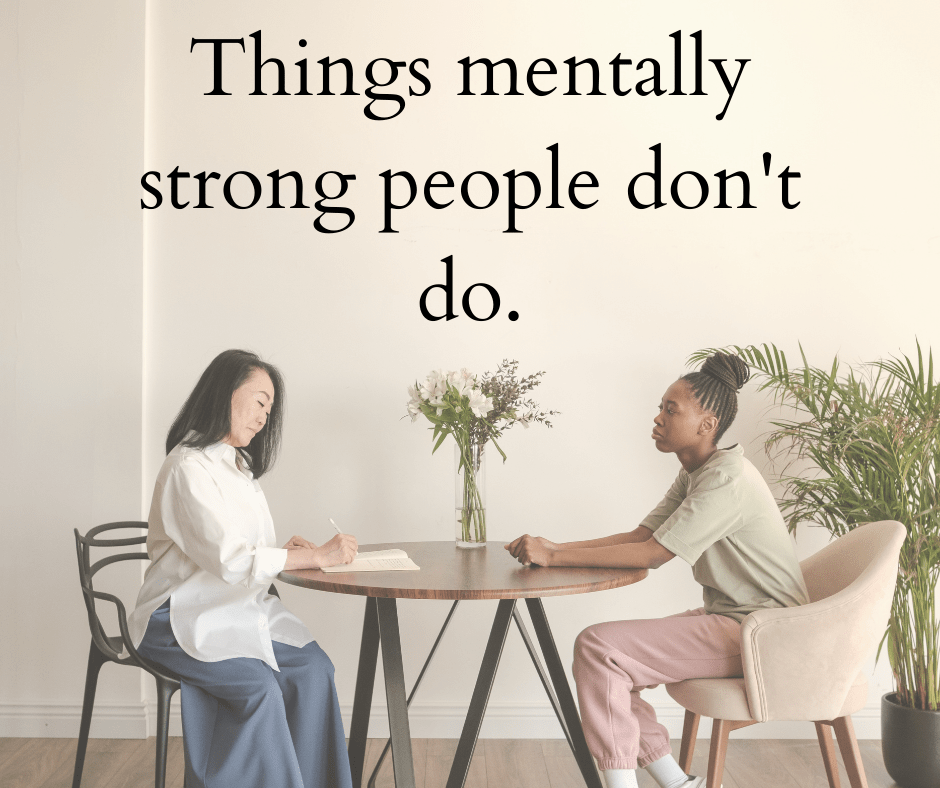 Things Mentally Strong People Don’t Do. Have you ever wondered how some people become so successful and rich in life even after living in poverty? Whereas some people are not able to achieve much even after having everything. The reason for this is – mental strength.

Do you know someone who always talks like this: what does this happen to me? I have bad luck. Everybody wants to bring me down. Such talk of helplessness is a sign of weak people. Such people get scared at the slightest trouble. And they start blaming luck or their environment. But mentally strong people never consider themselves helpless. They show courage even in trouble. And always try to find a new way. They do not sit and cry for luck or people.

Suppose you lose your job. So why will you start crying? Does losing a job end the world? In such a situation, whoever is mentally strong will have courage and will find a new job or will focus on starting a new business. No matter how small it may be in the beginning. So always think positively. And do positive things. By doing this, you will become more mentally strong.

Mentally strong people do not consider themselves weak

Mentally strong people do not think that others have the power to control their life. Nor do they give power to their circumstances to define them. They never blame their situations or people for their shortcomings, in fact, they focus on improving themselves.

Also Read: 5 questions you must ask yourself whenever you feel depressed.

Mentally strong people are not afraid of changes

Many people do not move forward in life because they do not like change. They want everything around them the same way. They get nervous seeing even the slightest change in life. Because they do not want to change themselves. But you need to understand that, change is only for the good.

Like there was a time when no one wanted to use online banking or UPI apps. Everyone found it very complicated. But gradually people learned and their life became comfortable. And today people do many of their transactions in seconds using the phone without going to the bank.

Hence, we can say that change is mostly good.

Mentally strong people make a goal for themselves. And then focus on that. They don’t care what the whole world is doing. If you want to become an Actor. So you can just work hard on your acting. That is in your hands. What other people are talking about in your dream should not bother you because that is not in your control. Hence you should also not try doing that. You just keep moving forward to achieve your goal.

Mentally strong people do not please others

You must have seen people trying to please everyone around them. They think that no one should think about them as a bad person. They constantly live in fear that people might judge them. Just to make their perfect image, they avoid talking their heart out with others which makes them a weak person. Doing this destroys a person’s self-esteem.

If you want to move forward in life, you should learn to take risks. But this does not mean that you should jump into the ocean without thinking. You should always first think carefully and then move forward. Like someone who is good at cooking, but is afraid to cook for a large number of people, then he would struggle his whole life. There are higher chances that he would spend his whole life doing something boring job and not following his passion out of fear of failure.

Mentally strong don’t dwell on the past

Also Read: How To Find Happiness In Life? (19 Tips)

Mentally strong people do not repeat past mistakes

If you are repeating the old mistake, then there are higher chances that you are weak inside. Mentally strong people never waste their time repeating old mistakes, they learn from them and move on.

Strong people do not give up easily

Mentally strong people do not give up even if they lose once. They try again. If a wrestler loses a wrestling match, does he never fight again? If a business comes to a standstill, should one never start a new one Everyone knows that success comes only by trying again and again? But many people try only once. If defeat is found, then they lose the courage to do that work. But what would you recommend to the person you love in such a situation? Obviously, you will ask him/her to try once again. Because this is how we achieve success. This is how life goes on.

Mentally strong people are not afraid of staying alone

some people always like to be surrounded by people. When those people go away they get upset. Many times people even feel depressed. But if you are mentally strong then you won’t be afraid of staying alone. I would say, if you are happy alone, then only someone’s presence will make you happier. Otherwise, you will many times feel miserable even in someone’s presence.

So, these were a few points that mentally Strong People Don’t Do. If you think you are mentally weak, then do not be harsh on yourself for the same. I would suggest you make a list of points that make you weak. And try to work on that list one by one. Do not impose big changes on yourself at once.

I hope this article was helpful to you.